The assembling of the TTSH kit was the main reason why it took me 4 Months between my last post and this post about the experience I made with the TSSH 2600 Arp Clone kit from Synthcube. All in all it was a very satisfying experience with an amazing end result. Since I was alway searching for photos and videos about the build process and final results, I decided to summarise my experience with a number of photos that might help other DIYers with building the TTSH - ARP 2600 Synthesizer Clone But let me start from the beginning.....

What is the TTSH

The TTSH is a clone of the famous ARP 2600 based on the design of THC - The Human Comparator. The ARP 2600 is a semi-modular analog subtractive audio synthesizer, designed by Dennis Colin for Alan R Pearlman, and manufactured by his company, ARP Instruments, Inc. as the follow-on version of the ARP 2500. <source: wikipedia.org>

After receiving the TTSH - ARP 2600 Synthesizer Clone front panel and PCBs in November last year and using the Black Friday sales at Synthcube for getting the TTSH parts kit, everything was ready to get assembled and soldered beginning of 2020. I have to admit that I had a lot of respect of the countless solder points and 3 boxes packed with parts. It took some days until I decided to start with the soldering works.

The quality of the PCB is very good and the front panel is really heavy and solid. However, as already mentioned by DSL-man, Patrick <dsl-man.de> (a great source for assembly tips, background information and components) almost all holes and cutouts for the sliders needs to be reworked with a file that the components fit through the openings. DSL-man also mentioned that a lot of the slider pins where bent which I can confirm since they all come unprotected in a plastic bag. As a minimum the sliders should be shipped a bit more protected to avoid bent or even broken pins.

Great references for help with the assembly are:

For all soldering works I followed the Fuzzbass recommendations on not to bend the legs of the parts after putting them through the hole. It worked quite well to support the parts with a piece of cardboard when turning the PCBs over for soldering. However, I still cut the legs after the soldering instead of cutting them before. I can only recommend to be very carefully with putting the right electronic parts into the right places. Better to double check each step before soldering them. Finding a wrong part at the wrong location afterwards, might get a ridiculous work.

Regarding matching transistors, I followed below measurement schematic. There might be much better ways to mach the transistors which might be also much more accurate, but the final result of the TTSH shows me that I was either very lucky or the matching of the transistors worked out.

After the soldering was done, I was a bid afraid to turn the switch and power the TTSH - ARP 2600 Synthesizer Clone. Much to my surprise and delight, the lights turned on and it even made some sort of sound. I can't emphasize how relieved I felt.

Now it was time to get everything calibrated. Owning a cheap Chinese DCO oscilloscope, I started with the calibration works. Although I'm pretty sure that it would have been possible to get everything calibrated with this oscilloscope, I decided that I need a real one since it was a good time to upgrade my equipment. Since the choice of available reasonable oscilloscopes in Qatar was limited, I went for the Silent SDS1202X-E. (Thanks Voltaat for delivering it faster than expected) With this oscilloscope, the remaining calibration works were a joy. Wondering why I wasn't able to get a proper Sinus wave form, I posted my problem in the TTSH Facebook group. Within a very short time I got a reply which guided me directly to the problem and solution. Pay attention to Page 19, Figure 4 of the fuzzbass build guide regarding the reversed Pins 2N3954 in VCO2. ;-)

After everything was up and running it was time to build the case. I brought already wood with me from Germany since pre-cut high quality wood is difficult to source here in Qatar. Having already built a case for the Model-D with Mahogany wood, I decided to use the same wood for the TTSH.

Since I ordered the wood already before I received the TTSH panel and parts, I had to guess the depth of the case which resulted in a case that was quite shallow but still big enough to house everything comfortable.

With an assembled front it was time to take care for the back side of the TTSH. I decided to assemble the lower part of the back side with 3D printed elements while I used for the upper part plywood. I printed further brackets to hold also the back panel in place.

Finally I decided to do some beautification on the back panel :-)

Since I wasn't happy with having such a great looking and sounding synthesizer equipped with very thin, bare and fragile slider knobs. I started designing caps for the slider and googled for examples of the original slider knobs. I adopted the design with smaller measurements and added a small window to get a more defined light shining through the slider.

Now I'm working on a Keyboard which matches the design of the TTSH. The Keyboard is based on a Fatar Keybed and will contain a small section for Eurorack modules to bring back some of the functionality of the original ARP Keyboard. 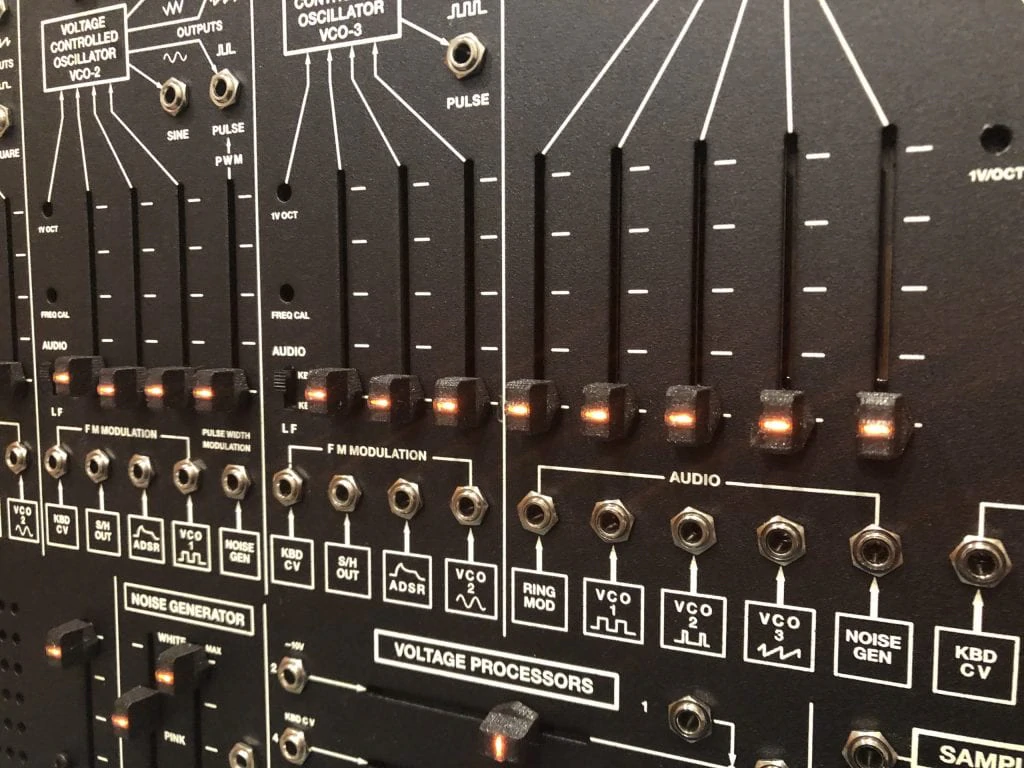